Syeda Ulya Ehsen Kazmi, prep year student and fture Economcs, Research Program master student, took care to sum up all the fun activities that international students can do during winter break "Moscow began to decorate streets and avenues since the mid of November. I got first invitation for a Pre-Christmas get-together from my friends Victoria and Virginia. On December 1st, we sat down in Virginia’s cozy abode and watched The Nativity Story"

Two weeks after the get together at Virginia’s place, Poboltaem, one of my favourite clubs at HSE, organized a Christmas Party on December 14th. Poboltaem is Russian for ‘we chat’. It is an English language club for HSE students who want to practice English speaking. They often come up with creative ideas and interactive activities to keep one engaged through the session. First thing I did after seeing their invitation was to share it with my friends at the International Preparatory Programme. When I reached, the organizers were giving the decorations their final touch. Vinley, Roksana and Nishad joined me from the Preparatory Programme. We discussed the Christmas and New Year traditions in our countries and in various regions of Russia. People spoke about what they like and dislike about these holidays. There was signing competitions, anonymous greetings on Christmas cards and short skits on the topics of Best Christmas Ever, Worst Christmas Ever and Preferences of Different Generations about Christmas. I played role of a mother in the Best Christmas Ever. It was fun. 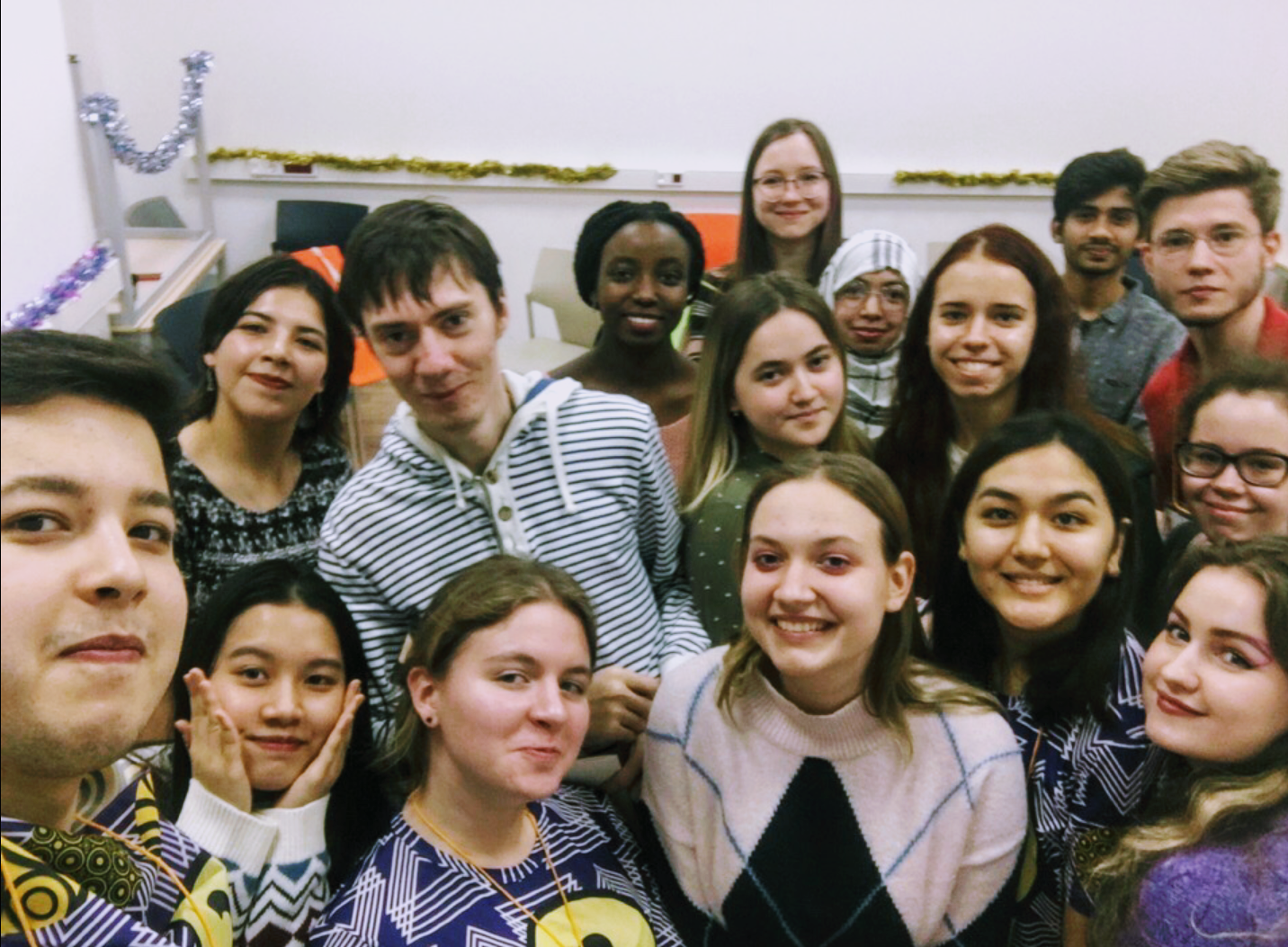 Christmas Party by Poboltaem [We Chat]

On the same evening was HSE Night. So, we bid farewell to the club for 2019 and went to the atrium to see what’s happening. Atrium was full of colours and music. Around the Christmas Tree (or Yolka), there was dance floor. By the walls of Korpus L, there were stalls for various games and causes. One such stall was for the advocacy of women’s empowerment. The lady there was very courteous. She explained it to us in English; we are thankful to her.

Then, on December 18th, one of our teachers Ms. Ekaterina brought us all candies from our programme office. They were delicious. The next day i.e. on December 19th we were invited to the New Year event in Korpus Z. It was organized by the programme office to introduce the preparatory year students to Russian traditions about Christmas. I didn’t understand all that was said. It was thoroughly enjoyable nevertheless. We all had a wonderful time. To my surprise, I also received a sweet reward for wearing an ethnic outfit. It was a Mouse full of candies. My friend Abigail also received a stuffed toy.

December 19 was also our last day at HSE for 2019 and the beginning of our winter vacations. To celebrate we went to a restaurant between Chistye Prudy and Lubyanka metro stations. Both the metro stations already wore a festive look.

In the early days of the vacations, Vinley, Abigail, Roksana and I went to try our luck at skating. That did not happen, but we got to see the fantastic beautification of New Arbat Street, Red Square and Manezhnaya Square. We also visited Mockovski Dom Knigi [Moscow House of Books] which is the largest bookstore in Moscow.

At New Arbat Street, shops and pavements were decorated and ice-rinks put in place.

At Manezhnaya Square, there were stalls in the names of European capitals such as Copenhagen, Brussels, Vienna, Prague, Bern and, of course, Moscow. Each stall had offerings from the city it was named after; souvenirs, food or both.

At Red Square (or Krasnaya Ploshad) there were ice skating rinks, concerts, ice theatres and a lot of selfie spots as it is an iconic location separating Kremlin and Kitay Gorod. I later attended a Christmas Walking Tour’19 where I learnt that Krasnaya Ploshad actually refers to ‘A Beautiful Square’ not Red Square as we call it today because the ancient Russian word Krasnaya also meant beautiful. I also learnt that a better translation of Kitay Gorod is “outer city” rather than China town.

After the tiring but pleasing walk we sat down for lunch at a Soviet styled restaurant called Stolovaya. Stolovaya is Russian for somewhere between a restaurant and a cafeteria. It offered quality Russian food at reasonable prices. I tried Plov there and it was tasty.

Russian equivalent of Santa Claus is Grandfather Frost (or Ded Moroz). He has a granddaughter called Snow Maiden (or Snegurochka).

On the last weekend of December, I visited my friends Virginia and Victoria again and together we decorated these Gingerbread Men.

New Year celebrations in Russia are not a single day but more than a week. There are public holidays from January 1st to 8th, people actually celebrate all through these days. Fireworks at my place started in the evening of December 31st and continued till January 8th. I also learnt that Orthodox Russian Christians celebrate Christmas on January 7th, and they also observe old New Year on January 14th, which is the start of the year according to the Julian calendar, but it is a usual working day.

To celebrate New Year, I went to Tverskaya Street. They had organized a marvelous thematic event of Space Mission from Tverskaya Square to Kremlin. Concerts and tableaus were being performed where artists were dressed up as planets, cosmonauts or aliens. The whole street was covered with awe-inspiring creativity. 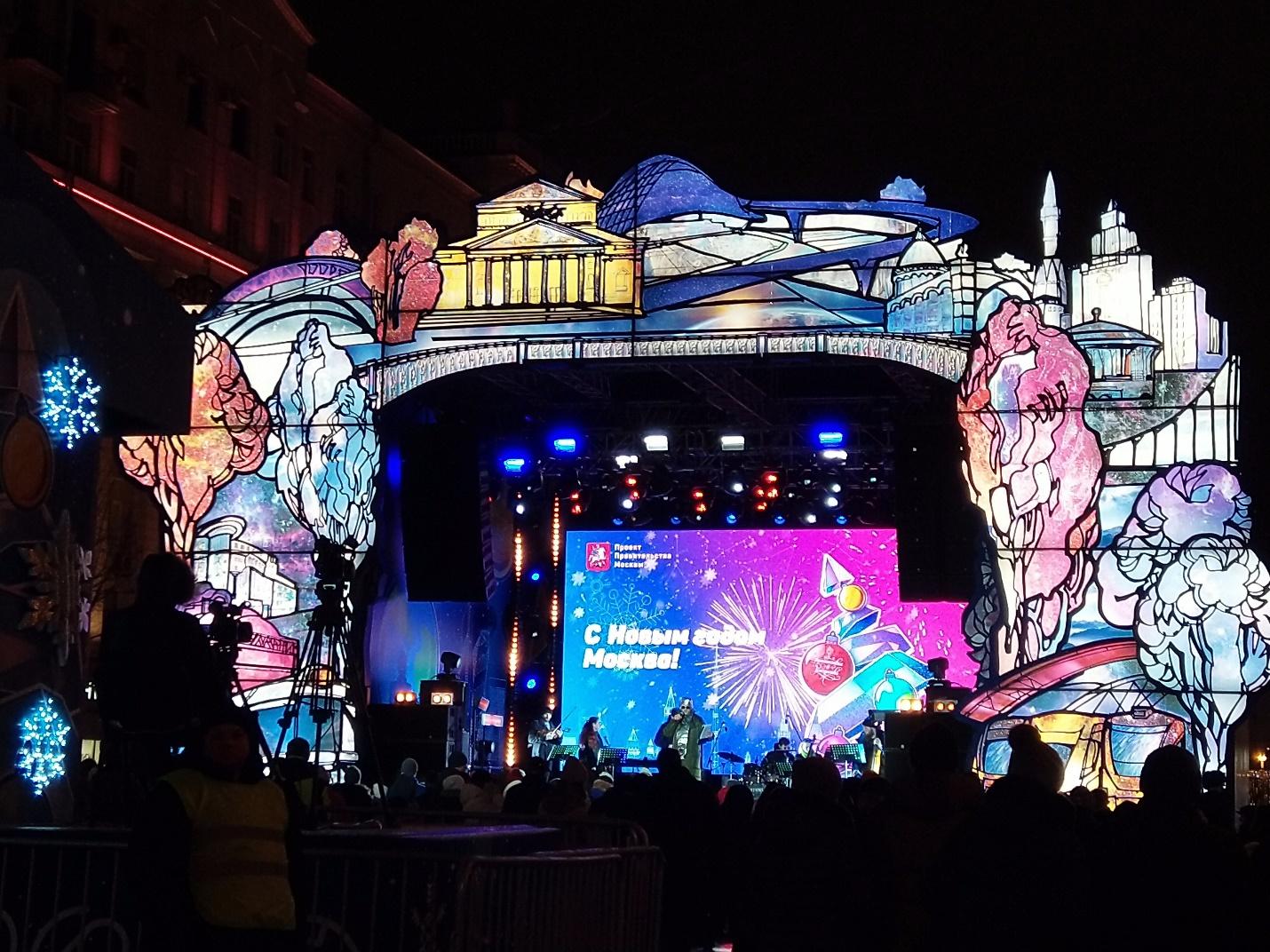